Hecate, Goddess of the Crossroads

Finding the symbolism to represent these crazy times

Finding the theme of 2021 in the midst of experiencing 2020 proved to be difficult for Beatrex and myself! I had this image of the Goddess Hecate standing at the crossroads in my mind’s eye pretty early on in the creative process. My curiosity ignited, I began my research on her. During this time many other ideas came and went, but at last a consensus: Hecate at the crossroads.

So, I created this digital graphic in less than two days. I actually tried to keep it more simplistic since time was of the essence, but once I began she took on a life of her own. For the overall design I was guided by one of the main qualities of the Tibetan Numerology of the year: movement. Everything from the typeface I chose to the zodiac symbols I created, I asked myself, does it show movement?

Hecate is a Titan from Ancient Greece, but there is evidence to suggest she is older and may originate from parts east, possibly Mesopotamia.

She is a lunar goddess of mystery and of magical practice, presiding over the phases of life, and of birth and death, protector of the vulnerable.

The crossroads is symbolic of an important choice to be made along the journey … a decision, a turning point, a rebirth, creativity. Hecate is sometimes depicted as having three heads or three bodies standing back-to-back, holding torches to light the way. In Southern Europe a crossroads was usually three roads converging to a point (like a capital “Y”). Thus, she sees in all directions simultaneously. At the center of the crossroads is both all roads and no roads. It’s a liminal space, a boundary, a place in between. From this place, all directions hold potential. As the Goddess of liminal spaces she is called upon for guidance.

Her torches are symbolic of her leadership, guiding initiates on their journey, and guiding the souls of the dead to where they need to go. It is Hecate who guides Demeter in her search for Persephone, and becomes Persephone’s guide and companion in the underworld. The fire on her torches symbolizes the light of the Moon and represents life and her connection to the life cycle. It also symbolizes the knowledge and wisdom gained through the process of initiation. Initiation is a symbolic liminal space, a threshold, a death and rebirth, a transformation borne of an experience.

She carries the key to unlock the mysteries and has the freedom to cross boundaries, the door or gateway being another symbol of a liminal space, a threshold that is neither inside nor outside, a place in between.

Dogs are sacred to Hecate. They are her companions and her heralds; barking dogs announce her presence. They are also a symbol of protection. She is also associated with snakes and serpent deities, symbols of healing and magic.

This is merely scratching the surface of this multifaceted goddess. For more about her, I recommend Circle for Hekate – Volume I: History & Mythology by Sorita d’Este and Hekate Liminal Rites: A historical study of the rituals, spells and magic of the Torch-bearing Triple Goddess of the Crossroads by Sorita d’Este and David Rankine. 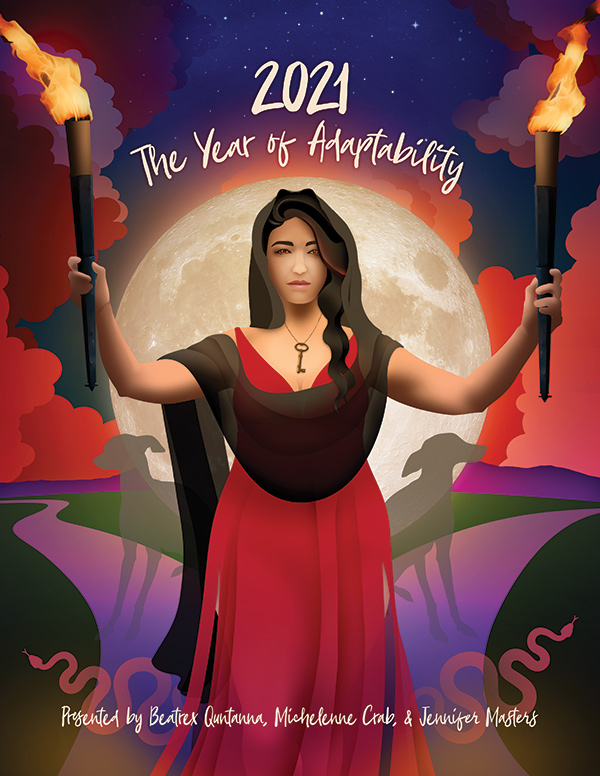